HomePeopleTransportation Director of the Year Smith Spent Half His Life in Pupil...
NewsPeople

From a young age, Dr. Kayne Smith, director of transportation at Cypress-Fairbanks Independent School District in Texas, always had a fascination for the yellow school bus.

“Even as a kid I remember I loved riding the bus,” recalled Smith, who was awarded the 2021 Transportation Director of the Year by School Transportation News. “By the time I got to high school, I was within the walk zone, ineligible zone so I didn’t get to ride.”

Smith will receive the honor during the STN EXPO Reno in December.

During his senior year of high school in Port Neches, Texas, he approached then Transportation Director Lane Emmett in the cafeteria and asked if he was hiring school bus drivers. “Which immediately showed my ignorance to the industry because of course, you’re hiring school bus drivers,” Smith said, adding that he thought driving would be the perfect college job.

“I turned 18 on June 30, 2003, and the very first thing I did on my birthday was go up to the transportation office,” Smith said, adding that the director had him parallel park and drive the bus around in the parking lot. “I filled out my application and I was hired. I got hired on my 18th birthday and I’ve been doing it ever since.”

Following his high school graduation, he started driving a route for the first day of school the following year. “And the cool thing is, in a small town, routes don’t change a whole lot there. So, I drove there for four years,” Smith said.

During this time, his dad, Robert (Bert) Smith was working at the local steel mill, as he had been for 30 years. But Smith recalled Port Neches-Groves ISD was suffering through a bus driver shortage even then so Kayne asked his dad to come drive between shifts.

Smith said when he was hired by another district to teach government and economics as well as coach athletics, which is what he thought he wanted to be his career, his dad took over his route. “I think he still drives the same route, my same route, to this day,” Smith added.

Smith said he joked at a recent Texas Association for Pupil Transportation Conference, for which he currently serves as past-president, that, “It makes a son proud to see his father following his footsteps.” Ultimately, Smith said it was nice that his dad was able to update him on how his kids were doing after all those years.

While he was teaching, Kayne was still driving a lot. Because his new district was also short drivers, he would have a sub teacher come in for his last period of the day and he would start transporting students home.

Prior to moving up the ranks in transportation, wife Emily had been accepted into Georgetown Law School in Washington, D.C. Born and raised in Texas (Smith shared his family has been in Texas since the 1840s), he moved with her to try something different. He drove a school bus for nearby Montgomery County Public Schools in Maryland for about a year.

“It was an enlightening experience because I’ve never been new to an area,” he said. “When you talk about a sub driver not knowing the area they’re driving, you know I was learning roads every day, and that’s a big area.” He added that in addition to driving, he helped around the office and wherever he was needed at the time. 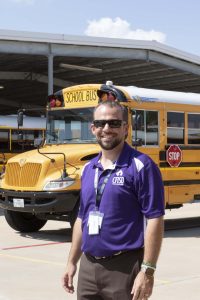 “I knew transportation was in my blood, but I think that solidified it for me, I was like this is what I want to do long term,” Smith said. “So, my wife and I had a conversation and we decided Texas is the area we want to settle in.”

From there, he was offered an operations supervisor job at Goose Creek CISD in Baytown, Texas in 2010. He stayed there for three years until he got his first director’s job at Texas City ISD, where he served for a year. From there he worked in other Texas districts including Cy-Fair ISD from 2014 to 2016 as the assistant director of human resources. Following that he was the senior director of transportation at Beaumont ISD.

“I had a great team that help manage transportation while I was busy doing other roles,” he said of his time at Beaumont, including when Hurricane Harvey slammed the area in August 2017.

He also served as the executive director of transportation at Dallas ISD, which at the time was taking student transportation services back in-house following the shuttering of the scandal-plagued Dallas County Schools. Then the director job became available at Cy-Fair, and his family was still living in the Houston area. “I’ve got to get home. See my family,” Smith recalled thinking when the job became available. “I joked with my wife, let’s become domesticated.”

He said that due to his outside experience from various districts, he can bring a different perspective to Cy-Fair. “It’s been beneficial to have those different experiences,” he said, adding that he’s 36 years old with a diverse leadership background, which helps him better serve his team. “I always have been surrounded by great teams, that’s the other huge piece. As a leader, you’re only as good as the team around you. So, I’ve been surrounded by great teams all throughout my career and I’ve been blessed and very fortunate for that.”

Editor’s Note: Read the November Issue, to learn more about Cy-Fair ISD and Kayne Smith. Plus, listen to Smith on Episode 88 of the School Transportation Nation podcast.