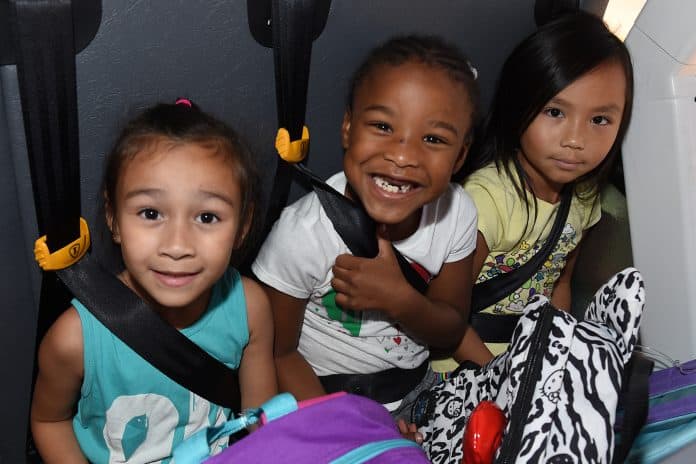 The Iowa State Board of Education has adopted rules requiring seatbelts on new school buses ordered on or after Oct. 2, 2019. The rules will return to the state’s Administrative Rules Review Committee for final review, which is preliminarily scheduled for sometime next month.

The rules were adopted unanimously by the State Board of Education on Thursday. The rules require lap-and-shoulder seatbelts and other safety equipment on newly purchased school buses.

Retrofitting of older school buses with seatbelts would not be required. Other required safety equipment would be an additional stop-arm per bus, handrails in the bus stairwell, exterior boarding lights, and fire-resistant crash barriers between the front row passenger seat and the bus driver.

“A second stop signal arm shall be installed on the left side at or near the left rear corner of the Type C and D school buses and shall meet the requirements of FMVSS No. 131,” the rule specified.

The State Board of Education released its changes/updates to Chapter 44, ‘School Buses’ in the Iowa Administrative Code. The code stated the changes reflect the standards that are recommended by the 2015 edition of the “National School Transportation Specifications and Procedures.”

The Iowa rule says the estimated cost impact for adding a three-point lap/shoulder belt is $123 per seating position. The average school bus capacity purchased in Iowa during 2016-2018 was 68 passengers. Based on that calculation, the report estimated the additional cost to equip an average school bus with the lap-and-shoulder belts would be $8,364.

On July 15, the Iowa Pupil Transportation Association provided its annual conference attendees with an exclusive look inside the school bus during a crash, to see how crash dummies that were not wearing lap-and-shoulder seatbelts, were thrown about the cabin.

The conference also reviewed evacuation times for students that are wearing the three-point belts. Max Christensen, the Iowa Department of Education state director, reported that it took just over 44 seconds for 37 students in lap-shoulder seatbelts to evacuate from the vehicle.

One challenge for attendees was how to enforce seatbelt use with high school students who are chaperoned by adult coaches and volunteers. Another hot topic was how to discuss seatbelts with parents whose children don’t have lap-shoulder seatbelts on their buses, but meanwhile, the safety equipment is present on other district buses that are serving other routes.

If the Iowa rule passes, it will be up to each local school district to decide how to implement and mandate their procedures.

In Montana, Cohn said that school bus drivers are not responsible for students who don’t wear their seatbelts. He said that as long as drivers make a reasonable effort to ensure the students buckle up, such as walking the bus aisle and scanning for belt usage, they have met their responsibility. He said that law enforcement in Montana wants bus drivers to be focused on driving, and not focused on enforcing seatbelt policies while behind the wheel.

Meanwhile, Smith said his district studied its routes and found quantifiable and defensible data that he and his team could provide parents. Smith chose routes based on buses that transport the most students, especially if the buses are conducting two elementary routes.

Smith also reviewed the distance of routes and routes with a high risk of high-impact crashes. When a parent calls, he said he gives them that data and the reasons he assigned the buses with seatbelts to those routes.

Feds Finalize Approval of All State Plans for ESSER Funds