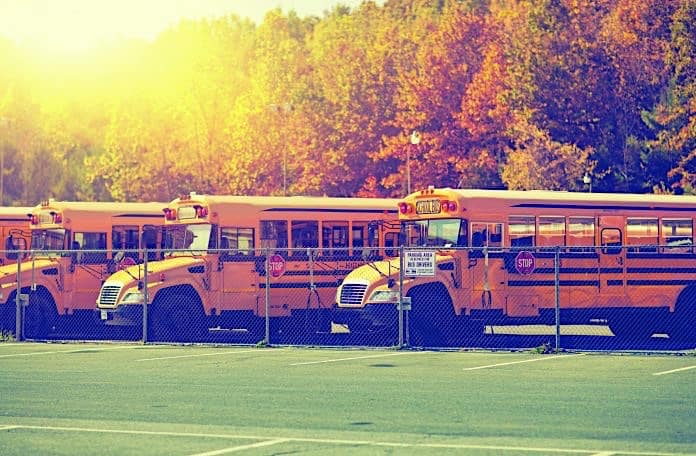 Brette Fraley had a curiosity about fire prevention. As executive director of transportation at Kanawha County Schools, West Virginia’s largest school district, he researched thermal events on his bus fleet and surprisingly found at least four fires incidents in the past five years.

No one was injured, but Fraley was alarmed enough to campaign for more than $100,000 to install 40 fire suppression systems (10 now and 30 later) on the Charleston district’s Thomas Built Buses Saf-T-Liner C2s for special needs students. The district transports 252 special needs riders per day, 24 of them in wheelchairs.

“It makes sense to protect students and the investments that taxpayers have made for school buses. It’s like having insurance,” said Fraley.

To showcase the investment, the district’s supplier Fogmaker lit up a trailer equipped with its fire suppression system. Parents, administrators, and the media could see firsthand how they could act as a lifesaver.

“The fact she had a fire creates credibility [for] someone how truly understands the impact of the system to the driver, the students and parents,” added Fraley.

The Department of Education has since added fire suppressions systems to the state’s approved options list, opening the way for Kanawha County to install Fogmaker on the districts’ remaining 28 special needs buses.

“Kanawha Schools was proactive in increasing safety on their buses,” said Joe Mirabile, president of USSC Group, which has manufactured and installed 150,000 Fogmaker systems on vehicles around the world.

While there are credible estimates of school bus fires, industry insiders say reporting is inconsistent across national fire databases.

The Volpe Center found that motorcoach fires occur on average slightly less than daily, while school bus fires occur slightly more than daily and result in significant property damage. Deaths and injuries are rare on yellow buses, but the worst-case scenario is devastating. The most well-known example occurred in Carrolton, Kentucky in 1988, when a fire erupted on a converted school bus after a drunk driver collided with it head-on. Twenty-seven people, mostly children, were killed 34 were badly injured 34.

Most school bus fires originate in the engine area, running gear and wheels. Nearly 70 percent of school bus fires are sparked by mechanical or electrical failures, and in some cases, an arsonist is to blame. Volpe researchers recommended that the industry share bus fire data and raise awareness through safety training.

Mandates for fire suppression equipment on school buses are spotty across the nation. Many states require fire-blocking upholstery and comprehensive inspections to check the routing and protection of wiring, fuel lines, transmission lines and other potential sources of ignition.

Florida requires a master disconnect switch located in the battery compartment to cut off electricity at the source. Nevada passed a state law several years ago to developed specifications for fire suppression systems, but that mandate was abandoned after successful school bus industry lobbying because the requirement would have voided the state spec.

Some operators go above and beyond government mandates to cover all bases. For instance, school bus contractor Durham School Services said its safety experts continually review new technologies. Last year, they tested and evaluated USSC’s Fogmaker system, and as a result, a number of its new buses will include the fire suppression product this year, according to Kate Walden, a spokeswoman for parent company National Express Corporation.

The Fogmaker adapted U.S Department of Transportation specifications for anything and everything with an engine, including school buses, fire trucks, ships, RVs, generators, and yachts. Strapped in the engine compartment, the pressurized mechanical device produces an enveloping mist that effectively stops a fire’s progression to at least give student riders an additional 30 seconds to escape.

Later this year, Kiddie Technologies, a division of UTC Aerospace Systems, will launch an automatic fire suppression system designed and tested exclusively for the school transportation market. The product deploys a dry suppressant when fires ignite in the engine or battery compartments.

“Student transportation has many parallels to the mass transit marketplace, which already incorporates automatic fire suppression on the majority of buses built during the past ten-plus years,” said Kiddie Technologies General Manager Jamie Cressman.

Meanwhile, Firetrace International produces a tube that provides a continuous loop of fire detection in any hazard area on a vehicle. The detection is coupled with a suppression system that deploys a dry chemical powder to extinguish fires.

“There are a lot of competing priorities for limited funds. Safety comes in many forms, and sometimes fire safety doesn’t receive as much attention as more visible safety concern areas. Certainly, there is a great value when an incident occurs,” said Firetrace Marketing Director Scott Starr.

It starts on the production side with a good bus design, he said, where electrical wiring is properly routed and carefully loomed to prevent shorting or damage resulting from chafing and exposure to excessive flexing, vibration and heat. The same measures apply to other sources of ignition, such as liquid or gaseous fuel tanks, hoses, lines and fittings.

On the user side, operators need to be sure their new buses meet fire safety standards before they go into service and that the standard is maintained throughout the life of the bus. Technicians and inspectors need to be sure any repairs to the bus are made carefully.

Driving trainers, drivers, and other school personnel play a part, as well. Hood explained that they should ensure that timed student evacuations from buses are practiced periodically throughout the school year. Drivers must know how to use fire extinguishers properly, and ideally, training should involve exercises to extinguish an actual fire.

“As a former technician, I can tell you that all of this is time-consuming, but necessary,” said Hood. “Even with the most robust efforts at prevention, fires can occur.”

Editor’s Note: This article was reprinted from the March 2017 issue of School Transportation News magazine.